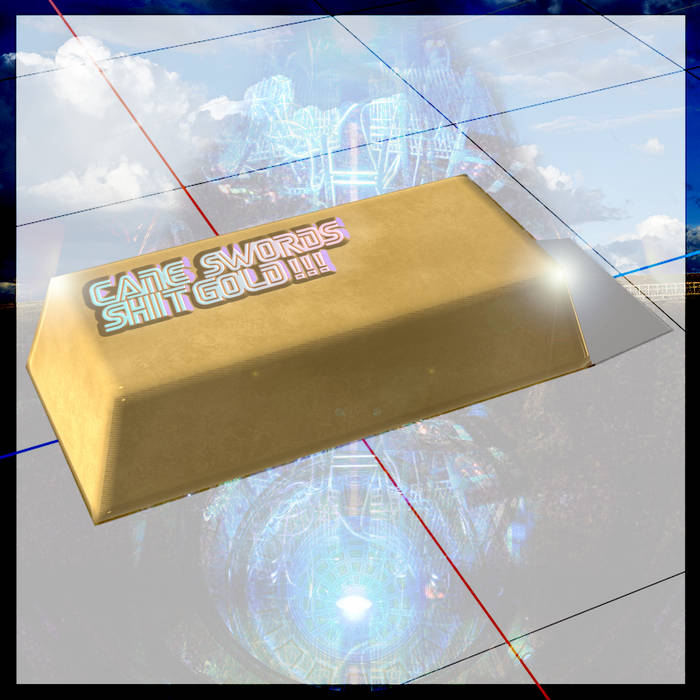 ‘Shit Gold!!!’ was originally released in February 2011 as a limited edition of 5 hand-dubbed cassettes in solid-gold painted cases & available only at the release party for the Rubber City Noise record label at the first RCN CAVE (Center for AudioVisual Experimentation) in Cuyahoga Falls, Ohio.

‘Shit Gold!!!’ was the debut release for the RCN Infinity Series of handmade releases (RCN∞1) and was released alongside the first Cane Swords album ‘Big Warmup in the Mouth of Eternity’ (RCN001). Never fully available outside of the original cassette, the end of 2021 finds ‘Shit Gold!!!’ freshly EQ’d, mastered, and sliced into tracks for proper digital distribution as a name-yr-price download.

In the galactic year 50036.5 a star in the distant Sword System went supernova. During this cataclysmic event, two alien life forms known as Boctru Rwn and Orkrdaral Vnn transmogrified their consciousnesses to pure electrical energy and beamed an infinite blue light out into the universe using interstellar telegraph technology. This blue beam of energy arrived at the Terran coordinates of 41°04'38N, 81°31'28W in Akron, Ohio in the Earth year of 2011. The arrival created aftershocks that radiated out and into the local water table, a large accumulation of psychic drift formed in the nearby Cuyahoga River and spontaneously evolved several specimens of Procyon lotor to self-awareness. This began the initial communication event. In a basement garage beneath a gutter bar and greasy pizza joint, beside the dirty river, the building of the temple began. Powered by voltage control and strange waveforms, Curt Brown & Karl Vorndran followed an unspoken call and constructed the space-hobo temple from shopping carts and electrical refuse. Once assembled the temple became antenna to channel the infinite blue light, creating Cane Swords, hobo refugees from distant stars symbiotically aligned with average Akronites in cosmic reconciliation. Meanwhile the evolved raccoons dined on a diet of cold pizza and warm beer alongside the crooked river.